Molly made her own soup for dinner tonight and here is her recipe in case anyone wants to try it:
1 can of green beans
1 pouch of tuna
1 small can of green chilis
10 small cans of water
And some Fennel Seed as her spice of choice

Beware of the foul stench it lets off when cooking. Also, it tastes like it smells. What terrible parents we are for LYING to our child and telling her how delicous it was when she made us try it. She did end up eating her entire serving and she even made up a song about it. Ah, the joys of 5 year olds. However, I NOT recommend the soup.

In case you’re wondering why it’s called Sea Kitten soup, PETA is trying to rename fish to sea kittens because it’s a much more cuddly name and who would want to eat something cuddly and cute? Right…. whatever.

Well not really but I saw this on Ann’s site and had to try it. So go ahead, yearbook yourself!
I promise to get some pics up of the kid’s Halloween festivities soon… 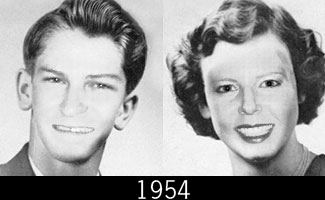 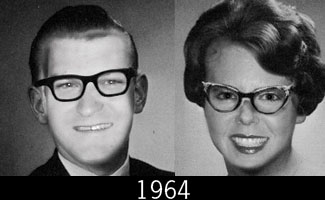 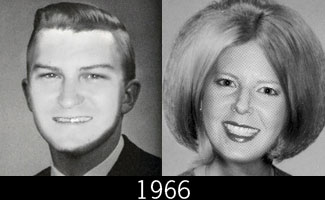 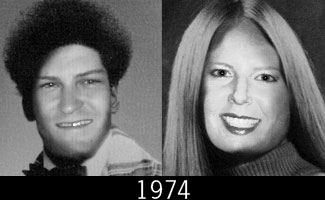 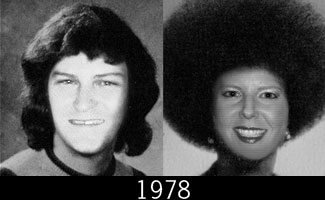 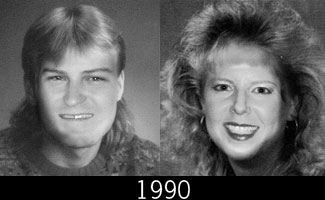 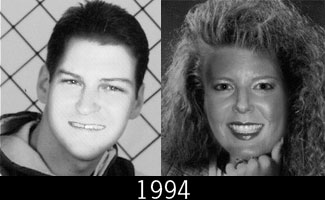 4 Comments |
Our trip to Austin

We just got back from our trip to Austin to Peter’s sister’s wedding. It was a fun-filled weekend with non-stop activity! You can view photos here. And here is a video I’ll leave you with. Molly and Oliver TORE up the dance floor at the wedding – well at least Molly did. If you make it to the end of the LONG video – you’ll see Molly end with the splits! Such talent but not from ME!!

Molly and Oliver dancing the night away from Kim on Vimeo.

3 Comments |
Out of the mouth of babes

This is the conversation between Molly and I in the car on the way to the mall:

Me: So, you want to be a mouse for halloween?
Molly: Yes, and Oliver can be cheese!
Me: What are daddy and I going to be?
Molly: I know! You be a cow and daddy can be the farmer and he will milk you!

I’m not kidding. It was the funniest thing EVER. This one was nearly impossible to get – I had to ask the kids to throw the wood chips at me just so I could get them somewhat close together in a shot. These days, it’s asking WAY too much to have them stand next to each other for a photo. Yikes! Christmas photos will be fun I’m sure. 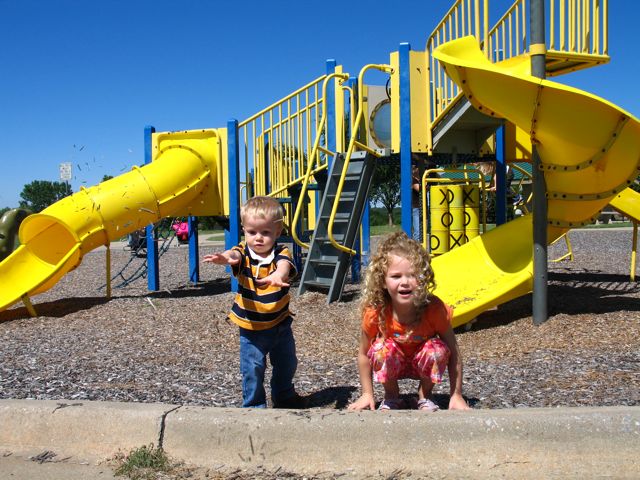 Last night and today were horrible for me (probably not as bad as three weeks ago when I had the worst sore throat ever/fever though.) It all started with attending the killer toning class at the Y on Wednesday. We literally did 100 pushups, 200 crunches, 100 lunges, 200 squats – I counted and all with weights. That night I was so sore so I knew I’d be even more sore on Thursday. Yep, I was so sore Thursday that I could barely walk. Somehow my sister-in-law convinced me that I needed to go back to the Y to walk it off. I agreed for some strange reason. I think I walked with a funny face of pain the entire 30 minutes because people kept looking at me funny. It was bad. Then I came home and crashed on the couch pretty much all night. I ran a few little fevers that night and woke up feeling sick to my stomach. I didn’t want to eat anything – I just wanted to lay on the couch. Oliver was good to me and played by himself until 11am when I finally decided to get off the couch. Finally I was so thirsty that I poured myself some Crystal Light lemonade but I still wasn’t hugry at all. I barely made it to pick Molly up from school. I seriously thought I was going to have to make a scene and get out of my car and puke in front of all the mom’s picking up their children. Not cool! But I made it home okay. I somehow mangaged to get the kids lunches and then I went back to the couch. I was still feeling very nauseous. I put Oliver down for a nap and then I went and puked. This is a BIG deal for me. I NEVER throw up. Maybe once every 5 years or something and not even when I was pregnant. This was deinitely weird. Thankfully, Oliver took a 3 hour nap today so that’s exactly what I did while Molly played Wii and talked to me the entire time anyway. Well, she also painted and colored some too. She did well to entertain herself except she kept drawing photos of her mad at me and trying to spell out words to reflect her feelings (which I’ll post later). And getting sick while you’re on South Beach is even worse! I wanted crackers so bad and soup. I did make myself a bowl full of yummy Chicken Broth – yippee.

On a good note, I finally finished up the OC book that I’ve been working on the past 9 months. Yeah!! That’s probably why I got sick – too tired from staying up until 3 am everynight the last week or so trying to finish.

Comments Off on Toning class, sick, and finished book |
Our very own pumpkin patch

So a long, long time ago (maybe Dec./Jan.), my dear father came to visit and decided that our rotting pumpkins from Halloween were an eyesore to our front door. All 3 small pumpkins had been sitting (rotting) in a nice little row on our porch since mid-October. I’d like to say I was doing some kind of experiment in decomposition or that I was trying to keep people away with the smell but I won’t spare you the lame excuse; I was just too lazy. So my dear father was kind enough to sweep them off  the front porch into our flower garden to “fertilize” it, I guess. Fertilize it did…with a HUGE blossoming pumpkin patch that I found sprouting early August. We didn’t even try to grow these. It literally has taken over our front walkway and we have 6 little pumpkins which are now turning orange and are perfectly round and healthy (a little early but what the heck). And if you know me or Peter at all, you’ll know that we are NOT landscape or garden people at all (meaning we don’t trim, prune, or water anything). This is truly a miracle. Happy early Halloween! Molly has been loving the progress. I told her yesterday to go water the pumpkins and she did just that – dumped water on top of the actual pumpkin, not the plant! 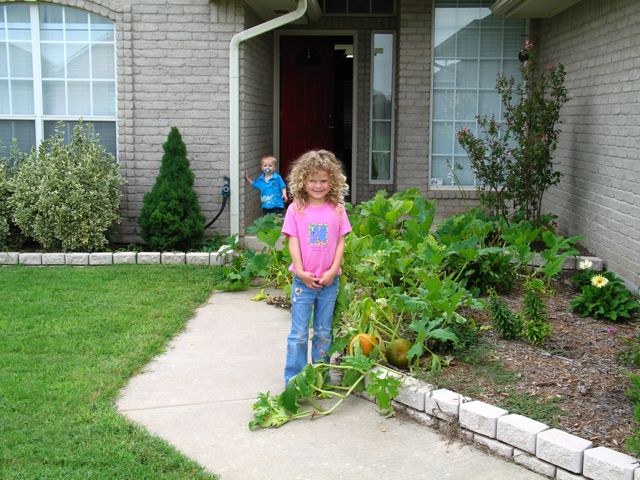 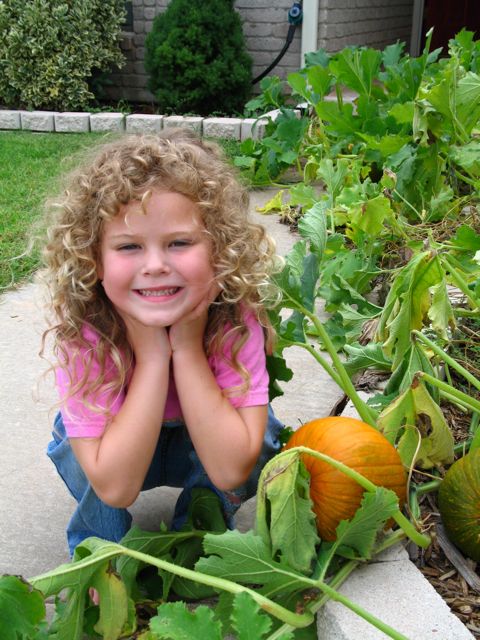 3 Comments |
Labor Day at the Farm in Missouri We spent Labor Day at my parent’s new (but old) place in Missouri. They recently moved to my great-grandmother’s farm from Colorado because my dad got a new job up there. Drastic change!! Going from 5 acres to 400 acres isn’t a small pill to swallow. But beautiful it is! Oh, the land! And you never get bored. I spent a day at the outlet mall, a night of fishing (I didn’t catch anything but Peter on the other hand caught 4 – he provided our lunch on Monday), an afternoon of lounging at Dean’s Creek and much more. Peter took a horseback riding trek with my dad for a couple hours one night (he’s got some interesting tales to tell). Molly caught some minnows in a bottle which later suffocated because she put the lid on air tight. What a lesson in survival though. We had a great time. We’ll be back at Thanksgiving with even more photos I’m sure. Click on the pic for a full album of our memories.

She absolutely LOVES Kindergarten. She gets up excited everyday and practically runs out the door. However, when I ask her what she likes best it’s always “Playing outside.” Go figure. Although she did blow me away by learning some sign language and a song spelling the word Red. It came out of nowhere. All week I asked her what she had been learning and then BAM – new song, sign language. She banks her achievements and then rolls them out all at once I guess. She also gets a turn to take home the pet Guinea Pig – Princess Pepper. Can you tell I’m rolling with excitement? Maybe I’ll tell them I have ninja cats or something. Comments Off on First Day of Kindergarten |
Look who turned 5!

Happy Birthday sweet girl! We love you! Look at the awesome cake that Peter made (I baked it and Peter decorated it!) Don’t tell anyone he has a little talent in cake decorating!!) I just think it’s awesome that my 5 year old GIRL wanted a CARS party! Makes it easy on the toy sharing! Comments Off on Look who turned 5! |